Breaking Up with “Breaking Bad” 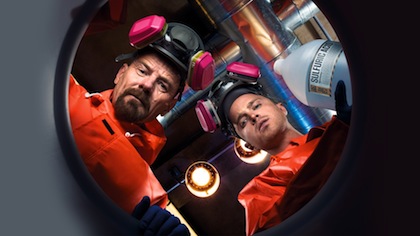 What does a guy do after he’s won ALL the Emmys? This is a question Bryan Cranston surely asked himself when the series finale of “Breaking Bad” was announced!

No doubt “Breaking Bad” made him a household name, but many of us had our first experience with him as the goofy dad on “Malcolm in the Middle” (for which he was also nominated for several Emmys). It’s safe to say that Cranston is pretty much the perfect actor – he’s just as great in dramatic roles as comedic ones . Now that he’ll have all this extra free time, more movie roles will pour in. He already has no less than 5 projects either waiting for release or just getting started, including high profile flicks like a Godzilla reboot and Kung Fu Panda 3 but also more low budget indie fare like the crime drama Cold Comes The Night and a comedy called Get a Job. We definitely haven’t seen the last of Bryan Cranston, and that’s a very good thing! But what about his cohort, Aaron Paul? Aaron’s had a pretty good run at the Emmys as well, having already scored himself two trophies for his role as Jesse Pinkman. We definitely hope to see more great things from Aaron in the near future. He has two projects currently in post-production, and it won’t be long before other filmmakers snatch him up. Personally, I’d love to see a full-length version of his tour de force starring role in “Weird: The Al Yankovic Story”. “Breaking Bad” will soon be closing up shop for good, but there’s still plenty of great stuff to look forward to from their stars.

In the meantime, check out our interview with Aaron Paul at the YH Studio below!