Bringing Mr. Brainwash Out Into The Open! 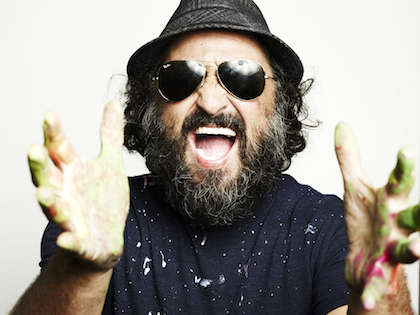 There’s a good reason why prolific street artists tend to keep a low profile – what they do isn’t always exactly legal! Even the most famous of the current street artists out there today, Banksy, is so elusive that people don’t know his real name or even what he looks like!

Banksy’s documentary, Exit Through The Gift Shop, tells the story of a fellow street artist named Thierry Guetta, AKA Mr. Brainwash . The film itself caused controversy, with viewers and critics alike certain that the film wasn’t completely on the level, that was all part of an elaborate prank by Banksy. Some have even speculated that Guetta is Banksy himself! Both artists have denied these claims.

If there are any lingering doubts as to Brainwash’s legitimacy, I think we put them to rest recently when we actually got to visit the artist’s L.A. studio! We sent our own Nikki Novak to the scene of so many creative crimes to get the scoop on this rather mysterious figure.

Check out our exclusive with Mr. Brainwash here: http://www.younghollywood.com/videos/tvfilm/up-close/street-artist-mr-brainwash.html