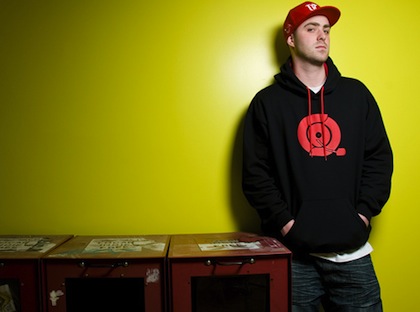 Luke Boyd, better known as Canadian rapper and producer Classified, is finally getting some love Stateside!

Born and raised in Enfield, Nova Scotia, Classified has been dishing out great music since 1995, with multiple Canadian Hot 100 hits and 14 studio albums already under his belt! You could say this guy is a pretty big deal in his home country, but we’re excited to hear that his music is starting to trickle down across the border!
We’ve been hearing a lot of buzz about his newest self-titled album, especially his song “Inner Ninja.” The album itself debuted on the Canadian album charts at #1, and the single reached #5 on the Canadian Hot 100. This guy is definitely going places!
“Inner Ninja” features David Myles and is a refreshing take on the hip-hop/rap scene, with lyrics that are light and a beat that’s pop-based. If you love the song like I do, then you definitely need to check out the visuals that go with it! It’s impossible to watch it and walk away without a smile. It’s a party in 3 minutes and 30 seconds.
Even though he’s been doing his thing up north for years, he is a fresh face for American hip-hop enthusiasts, but I think he will be embraced with open arms; even he refers to his momentum in the States as a “new start.” You’ll definitely have “Inner Ninja” on repeat this summer!
Check out the “Inner Ninja” video below!