Keeping Up With The Janoskians! 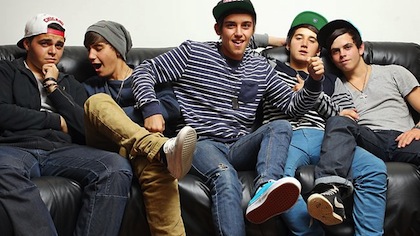 It might be easy to dismiss The Janoskians as just a bunch of troublemakers, in the vein of the “Jack Ass” guys, but there is way more to them than that. This group of five mischievous Australian lads does like to stir the pot, no doubt about that, but you can’t deny their cleverness and humor. By their own admission, they mean no harm – they just want to entertain!

Made up of brothers Beau, Jai, and Luke Brooks, along with Daniel Sahyounie and James Yammouni, The Janoskians have gained popularity (and notoriety) over the last couple years thanks to their hilarious and often pretty elaborate YouTube videos, featuring them pulling pranks and stunts upon the unsuspecting public. In addition to that, though, the boys produce a number of skits and parodies (like their send-ups on “Man vs. Wild” and Paranormal Activity). They have further expanded their horizons into the world of music, and they have record deals with Sony Music Australia and Jay Sean! Their first single, “Set This World On Fire”, dropped in September, and their newest single, “Best Friends”, was released just last week. Pretty impressive for a group of juvenile delinquents, huh?