Shailene Woodley Poised to Become the Next Jennifer Lawrence! 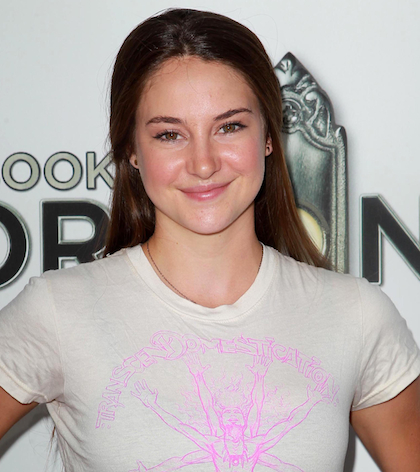 Shailene Woodley has a slate of big, highly-anticipated projects on the horizon that are likely to catapult her into legitimate superstardom on par with the likes of Jennifer Lawrence, Kristen Stewart, or Emma Watson.
The 21-year-old has been acting pretty much her whole life, but her big break came when she was cast as the lead on ABC Family’s “The Secret Life of the American Teenager” in 2008. In the meantime, she dabbled in films too – playing the daughter of none other than George Clooney in the critically-acclaimed and Oscar-nominated film The Descendents.
Now that “Secret Life” is ending its 5-season run this year, she has more time to devote to movie projects. Firstly, she won the lead role of Beatrice Prior in the film adaptation of Veronica Roth’s Divergent trilogy. Given the trilogy’s cult popularity, I won’t be surprised if this series does actually become the next Hunger Games.
In the meantime, Shailene is also busy filming The Amazing Spider-Man 2, having been tapped to play Spidey’s other main love interest, Mary Jane Watson! If this sequel does half as well as the first one, then Shailene is destined to become a household name.
But wait, there’s more! Shailene will balance her blockbuster roles with a more dramatic turn in a film adapation of John Green’s acclaimed novel The Fault In Our Stars. Again playing the lead, Shailene will have the opportunity to show off those acting chops we all saw and loved in The Descendants. I predict many more awards and accolades on the horizon after this comes out!
I’m proud to say that we had the soon-to-be megastar in our YH Studio during her Descendants run and even got to celebrate her birthday with her! Check out that interview below, as well as a chat with her from the set of “Secret Life”, and be sure to keep a sharp eye on her in the coming year!