Taking A Stroll Down Gaming Memory Lane with ‘Wreck-It Ralph’ 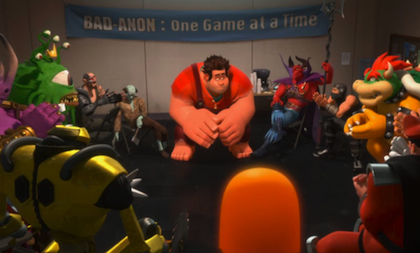 When I went to see Wreck-It Ralph recently, the theatre was filled with only adults. Seriously, not a kid in sight! Now why do you suppose that is?

I think the answer is pretty simple. Wreck-It Ralph focuses on video games and characters that were popular with the previous generations. These days, kids are all about Call of Duty and Halo and those ultra-realistic first-person shooter games. Back in the day when I was growing up, it didn’t get more epic or cutting edge than a couple of levels of Zelda or stomping ‘shrooms with Mario and Luigi! Going back even further, it was all about Pac-Man and Donkey Kong.

Wreck-It Ralph pays tribute to all these old school gamer characters, specifically in the great group therapy scene, in which Ralph, a video game villain, attends Bad-Anon and admits to his other fellow villains that he doesn’t want to be the bad guy anymore. (Other classic baddies in the group include Clyde the Ghost from Pac-Man, M. Bison from Street Fighter, Dr. Eggman from Sonic the Hedgehog, and Bowser from Super Mario Bros.) So, as you can see, there is a significant nostalgia factor here.

That’s not to say that 21st century kids can’t enjoy it either. If nothing else, Wreck-It Ralph keeps those old games alive and well for the younger generation to be exposed to. But aside from that, there’s plenty else to keep teens and tweens entertained – great animation, high-flying action, hilarious dialogue, and captivating characters. All ingredients shared by old AND new school video games!

See the trailer at younghollywood.com