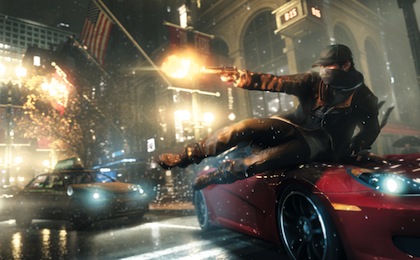 The E3 Expo kicked off yesterday at the L.A. Convention Center, and there is already a buzz about some of the games being showcased. We’ve been getting a firsthand look at what the gaming world is about to unleash on the world, and we handpicked a few as the most highly-anticipated!

1) Ubisoft is known for their super successful games, such as Splinter Cell, Assassin’s Creed, and Far Cry, and its upcoming release promises more of the same. Watch Dogs surrounds the player as the character Aiden Pearce (voiced by Noam Jenkins) and his ability to hack into various electronic systems currently under the possession of the city. The purpose of this is to control or completely destroy it via numerous objectives given to the player. One really standout component of Watch Dogs is the ability to do online multi-player co-op, where someone might be the shooter and another could work the surveillance cameras to take down the systems more effectively.
2) Action-adventure games are always top-sellers, and we expect Activision and Bungie’s Destiny to be no different. Destiny is already being slated to blow Call of Duty out of the water, which is a pretty bold statement and would be an impressive feat considering how popular that game is. It is set to be released sometime in 2014 on Playstation 3, Playstation 4, Xbox 360, and Xbox One. This is one game we are keeping our eyes peeled for, so put it on your radar too.
3) Can EA do any wrong when it comes to a sports-related game? Drake (a HUGE fan of  the FIFA games) introduced the popular soccer game franchise’s newest addition, which has multiple improvements that are sure to enhance the gaming experience, such as: player movement is more precise and exact to allow a new variety of shots and passes; players are able to protect the ball from opponents; shooting accuracy has increased; ball physics have been added; and there is more teammate awareness. This is just to name a few. These additions will definitely give gamers a more realistic experience.