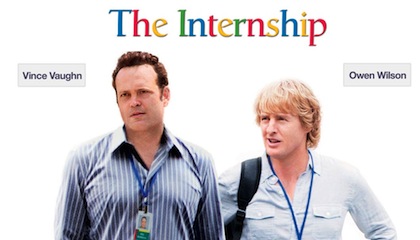 It’s been 8 years since Vince Vaughn and Owen Wilson had us busting a gut to their antics in the 2005 flick Wedding Crashers. So, what sorts of shenanigans could Vaughn and Wilson get into almost a decade later? Well, looks like they’ve traded in crashing weddings for crashing Internet corporations!
The Internship follows two out-of-work salesman who worm their way into a cushy internship with Google. It’s the classic story of “if you can’t beat ‘em, join ‘em” – they lose their jobs thanks to growing digital advancements, so they attempt to get into the tech game themselves. It’s weird to think of Vince & Owen being “the old guys” now; you just don’t see very many 40-something interns that often!
I, for one, am really excited to see this duo on the big screen together again. Their chemistry, their ability to play off each other and improvise makes them one of the best comedy teams out there. It’s hard to believe that this is only the 3rd film they’ve appeared together in (the other one being 2004’s Starsky & Hutch) because it seems like they’ve been together forever!
We recently caught up with Vince to get his thoughts on how to nail the interview for that perfect internship and, as always, he had some unique words of wisdom!

The Internship also stars Jessica Szohr and Josh Gad, who stopped by the YH Studio: