“X Factor” Turns Up The Heat! 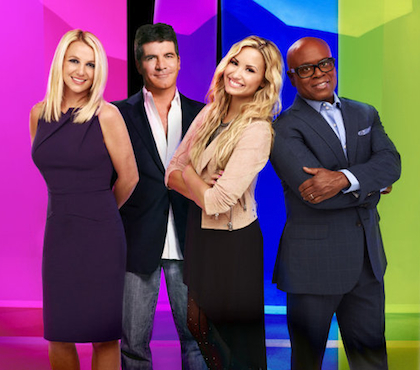 The second season of “The X Factor” has turned out to be a real smash, easily eclipsing the first season, thanks in part to the inclusion of superstar judges Britney Spears and Demi Lovato, but you also have to give credit to the amazingly talented singers who have come their way.

Simon Cowell & Company have whittled down the finalists to just 4 acts in 4 categories. Brit was put in charge of the Teen singers, of course, consisting of Beatrice Miller, Arin Ray, Carly Rose Soneclar, and Diamond White; Demi has been mentoring the Young Adults (again, fittingly), which include CeCe Fret, Jennel Garcia, Willie Jones, and Paige Thomas; L.A. Reid was chosen to mentor the Over 25s (which he wasn’t really happy about) consisting of Vino Alan, Jason Brock, David Correy, and Tate Stevens.

And then there are Simon’s Groups: LYLAS (who will have to come up with a different name before the live shows), LYRIC 145, Sister C, and Emblem3, the charismatic trio who has been a heavy favorite throughout the competition, not just among the viewers but with us here at YH as well!

The contestants have already worked so hard during the course of this season, but now, the pressure is REALLY on! Tonight is first of the all-important live shows, where the judges will pick one of their own to eliminate to get the number down to 12. After that, it’s up to the audience to decide who stays and who goes.

The stakes couldn’t be any higher now!